Properly punctuating a dental hygiene resume may not seem important, but it really does make a difference in a tight job market like dental hygiene.

Punctuation marks are like mini road signs. Without them, sentences and statements don’t always make sense or can be understood differently. Obviously, the last thing you would want is to confuse a potential employer. This can cause them to make assumptions about your attention to detail, communication skills, and even work ethic.

Here’s eight of the most common problem areas I see when reviewing dental hygiene client resumes and cover letters:

When you are offering up a complete sentence, such as in your opening statement (sometimes called “Objective” or “About Me“), always include periods where appropriate.

But when it comes to listing skills and competencies on your resume, most writing experts agree that since they are not complete sentences, periods are optional. So I usually leave them off for aesthetic reasons. 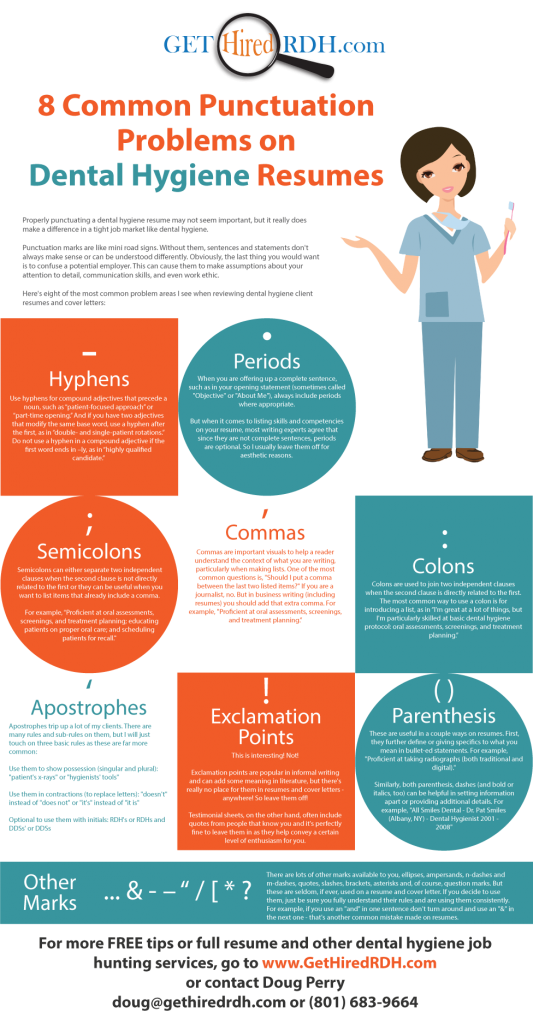 Semicolons can either separate two independent clauses when the second clause is not directly related to the first or they can be useful when you want to list items that already include a comma.

Colons are used to join two independent clauses when the second clause is directly related to the first. The most common way to use a colon is for introducing a list, as in “I’m great at a lot of things, but I’m particularly skilled at basic dental hygiene protocol: oral assessments, screenings, and treatment planning.”

Commas are important visuals to help a reader understand the context of what you are writing, particularly when making lists. One of the most common questions is, “Should I put a comma between the last two listed items?” If you are a journalist, no. But in business writing (including resumes) you should add that extra comma. For example, “Proficient at oral assessments, screenings, and treatment planning.”

But also remember that commas are important visuals that help readers understand what you mean. Check out how the meaning of these two sentences changes by adding two commas.

Apostrophes trip up a lot of my clients. There are many rules and sub-rules on them, but I will just touch on three basic rules as these are far more common:

This is interesting! Not!

Exclamation points are popular in informal writing and can add some meaning in literature, but there’s really no place for them in resumes and cover letters – anywhere! So leave them off!

Testimonial sheets, on the other hand, often include quotes from people that know you and it’s perfectly fine to leave them in as they help convey a certain level of enthusiasm for you.

These are useful in a couple ways on resumes. First, they further define or giving specifics to what you mean in bullet-ed statements. For example, “Proficient at taking radiographs (both traditional and digital).”

Similarly, both parenthesis, dashes (and bold or italics, too) can be helpful in setting information apart or providing additional details. For example, “All Smiles Dental – Dr. Pat Smiles (Albany, NY) – Dental Hygienist 2001 – 2008″

There are lots of other marks available to you, ellipses, ampersands, n-dashes and m-dashes, quotes, slashes, brackets, asterisks and, of course, question marks. But these are seldom, if ever, used on a resume and cover letter.

If you decide to use them, just be sure you fully understand their rules and are using them consistently. For example, if you use an “and” in one sentence don’t turn around and use an “&” in the next one – that’s another common mistake made on resumes.

I offer a wide range of job-hunting services. I will need to give you a quote on the cost. I do offer packaged discounts for multiple items. Simply click on the item(s) you are interested in and check … END_OF_DOCUMENT_TOKEN_TO_BE_REPLACED

How dental hygienist Tracie Perry was able to land a great dental hygiene job in about 30 days... In 2010, Tracie graduated from dental hygiene school with only a hope that she would find a job. She … END_OF_DOCUMENT_TOKEN_TO_BE_REPLACED

Join our Facebook Discussion Group! With a several thousand members, we discuss dental hygiene resumes, interviewing, job searches, and other tips, tools, and techniques for a modern job search! … END_OF_DOCUMENT_TOKEN_TO_BE_REPLACED

Dental hygiene staffing agencies can play a very important role in helping you find a great job. Make sure they have your dental hygiene resume and are helping you land a permanent placement. Some … END_OF_DOCUMENT_TOKEN_TO_BE_REPLACED

Thanks for clicking on my frequently asked questions page. I get tons of questions about dental hygiene resumes, job searching, interviewing, and much more. These are the basis for the articles I … END_OF_DOCUMENT_TOKEN_TO_BE_REPLACED

Contact me now about your dental hygiene resume or other job-search needs. You can do so by phone, text or the form below. Please send you comments, questions, feedback, and suggestions using the form … END_OF_DOCUMENT_TOKEN_TO_BE_REPLACED

Positive resume action words are verbs you can use to begin a sentence in your dental hygiene resume to describe your skills, results, or accomplishments. They give your reader an interesting shortcut … END_OF_DOCUMENT_TOKEN_TO_BE_REPLACED

You may have heard the terms "passive" and "active" writing styles. In dental hygiene resume writing, active is best for two reasons. First, it helps conserve precious space on your resume. And, … END_OF_DOCUMENT_TOKEN_TO_BE_REPLACED

Here's a list of 100+ positive personality adjectives you could potentially use on your dental hygiene resume to describe your personal brand. This list is certainly not exhaustive so we would love to … END_OF_DOCUMENT_TOKEN_TO_BE_REPLACED